The spoil bank of the former Tuchlovice Mine makes for one of the biggest ecological burdens in the Kladno area. The waste site was created in the Tuchlovice cadastral territory in 1941, while the depositing of tailings at the site was terminated in 1997. The dump itself covers an area of 18.5 ha, and has the shape of an irregular blunted cone with a height of 74 m and a volume of almost 5 million m3. An inappropriate technology for piling the tailings (the tailings were deposited from a conveyor belt) created the distinctive blunted cone which has proved to be an extreme interference in the character of the surrounding landscape.

The technical solution of the project focuses on the elimination of impacts made on the environment by the old waste site. In this locality, the solution consists in the effacement of consequences stemming from black coal mining activity and the subsequent nullification of caused infusions, the prevention of new infusions and the securing of a sufficient stability of the waste site. 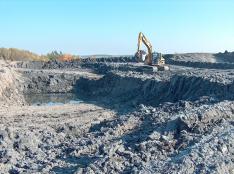 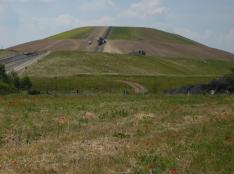